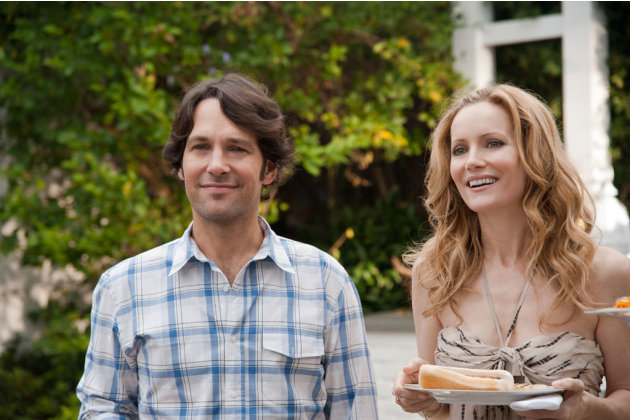 After changing the face of comedy with “Anchorman,” “The 40-Year-Old Virgin” and “Knocked Up,” Judd Apatow was on top of the world. Then he threw it all away with the bloated, unfunny Adam Sandler starrer “Funny People.” Now Apatow is back to reclaim the eye of the tiger with “This is 40,” featuring Pete and Debbie, the bickering married couple from “Knocked Up.” Does he get the eye back?

Approaching their fortieth birthdays, Pete (Paul Rudd) and Debbie (Leslie Mann) are approaching the big day in very different ways. Pete is having a big party, while Debbie insists she’s only 38 and wants her birthday to go by unnoticed. They’re also having money problems, thanks to Pete’s struggling record label, an embezzler at Debbie’s store and Pete’s moocher of a dad, played by Albert Brooks.

Advertised as a sort of sequel to “Knocked Up,” “This is 40” is as much a sequel as “Get Him to the Greek” is a sequel to “Forgetting Sarah Marshall.” It’s not a sequel. It’s just a film that spends 134 minutes with two people and their kids from “Knocked Up.” Seth Rogen’s character is mentioned at one point, but he doesn’t make an appearance, nor does Katherine Heigl. Sure, Rudd and Mann are great together, but a movie needs more than just likable characters, especially when its over two hours long. Sitcoms can get away with that, but only because they’re only 22 minutes long.

All of Apatow’s usual devices that made him so popular in the first place are back. Pop culture references out the ying-yang, exceptional potty humor, great cameos and magical improv all play large parts in making “40” tolerable for its run time, which is too long by at least 20 minutes.

Apatow has made some astute and hilarious observations about middle aged life, but that’s all he does. The more films he makes, the more obvious it is he’s trying to be some kind of mainstream, West Coast version of Woody Allen, and it just isn’t working.

The paper-thin plot wears thin about halfway through “40,” when a half-hearted attempt is made to introduce some conflict into Pete and Debbie’s marriage that “might” be trouble for their relationship. No matter how many of his famous friends he casts, including Jason Segel, Melissa McCarthy, Lena Dunham and Chris O’Dowd, can make up for a film that’s essentially a series of skits edited together into a move. Unless a teenage daughter’s lingering anger over not being able to watch the final episodes of “Lost” can be considered a plot point.

If middle age is about sputtering along without much direction and complaining about your life, then maybe Apatow totally nailed it and that is 40.